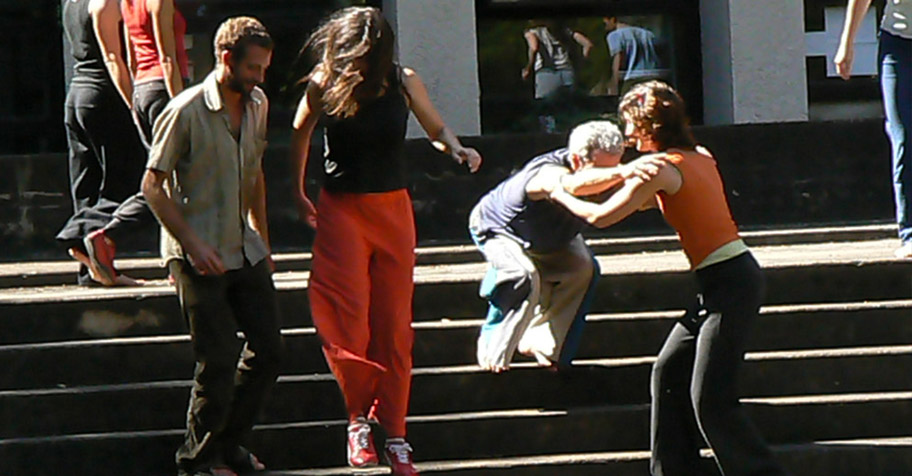 « SKIN
What covers
This organ defines it
My customs office and migration and immigration office
Membrane that contains the being i am.

A fertile work of interpretive experiences
the challenge of releasing what is known and willing to be spontaneous.
Perhaps we only look at each other for a long time,
being still i going on dancing,
and we became one. »

« Skin is getting from the skin to the organs,
is now part of my sight, of my smell, of my dreams, of my thoughts.
Digging into bright and dark holes and the space between them, and the thickness of their silence.
Which contrasts have opened between the not knowing and the becoming? The time allowed to ventilate the egos and their creative potential is melted to the present.
To carry the playful impulse to a common place. A delicious formula.
The possibility to act as a living organism, from the inside out.
The attention was a challenging all, the cameras, the musicians and all our bodies; those who composed the stillness and movement.
But the way in which the clarity unfolded had its effects in the final work.
There was no doubt that the words flowed as extensions of all the rest.

Now, after a few days, I’ve settle and visualized the material quietly. The material which you can see and which remained inside. And then greatly enjoy what it was, what is and what is to come!
For all those moments of authentic listening, action and creation. Thank you for always! »

» To find words is as simple as the complexity which causes me searching.
Partially i do not want to find them but on the other hand they already arise many.
I believe that the experience beyond the « end » result was the seed. That will germinate from here and now on…
The words of Dani continue to suggest that peace which promotes. Continue stirring the feeling of the present that was and remains. These last three days I’ve been feeling sensations, rubs, voices, breaths, silences. Images of that place come constantly to my mind. Images of your faces, from the gentle voice of each one has.
Still i hear how i didn’t heard as i listened to those who spoke softly. Still I see the late arriving ones without arriving late. Still I live in this world made of grass, trees, sky, water, cement and life.
At the beginning, my intrigue that exceeded my anxiety, left room for my complete surrendering to the flow of these moments.
From my place, I was able to get to know the secret of the movement, stillness, silence and music.
I got to know a little more my own species. All beings made of the same energy, all vibrating in the same frequency.
To repeat it would be unnecessary. To generate more almost a necessity. Sensations, all. Feelings, mutuals. Expressions, sincere.
I felt: respect, freedom, pride, i felt love, happiness and sadness for the time that can pass by until we meet again.
Thanks, word which is sometimes so lost in its essence. Thank you, a feeling that transforms the desire to say in a word, an intention. »

« Skin had proposed me a space, time, a procedure, an intention, it has something that led it to « be » and to « exist », for me, was and remains a question. I had a calm confidence that together we would construct « something », at times forgot enquire about what it was that something, in other i wondered: why are you doing this project? And for whom? Before that the experience of the saturday could respond my question, I didn’t stop asking myself questions, I wanted to dig deeper, to go beyond the body sensations of an alter ego, trying to find my own response and with it the motivation of my « to do and be » and then « to meet » with the other and dwell together this small kingdom, the courtyard of the Faculty of Architecture. There were moments in which folding into myself I felt I could follow my taste, my whims, my desires without worrying about the rest, but I was hardly aware of that and I was takes over by a confused feeling that paralyzed me. I was wondering could I do it or not? After a while I felt impulses, like a mandate that made me return again and again to the score of connecting to the whole and it then I remain asking myself: how is that I can choose then? »

Somebody named the word ‘organism’, a light, a signal on which to reflect upon the words of Bergson. Under their gaze i could understand something essential about this feeling of confusion that I referred to earlier, by comparing the « society » to an « organism » speaks of a own antagonistic force of all « living organism », to follow or imitate a natural order, a discipline by which your cells in mutual dependence are maintained unified and integrated, making life possible and letting you exist, be and evolve.

We were there, a small society, united by a subtle and delicate discipline of doing, we have at least one common goal, the skin, and our « leaves » began to interbreed holding us mutually. With solidarity and open to the proposal, we let ourselves be taken by the « skiniana current », we were given tools and we were united under the water, and each flower could be visible on the surface. I was there, trusting, accepting, feeling also privileged and gratified. I save secretly for me the sensation to be conspiring, i’ve felt part of a fun adventure in which perhaps i would be lost, but, absolutely would go where the current may take me and converge with everything and everyone.

We’ve all belong to this « small kingdom-organism » and also to ourselves. We could choose diving in our inner life deeply, or speak through the surface of ourselves and in solution with the others to create, invent, imitate, invite, provoke, investigate, talk, feel, be silent, laugh… we managed to communicate among ourselves and with the public-new cells who were present during the process and on Saturday. They answered many questions. We could transform our everyday life and that of some people, we could transform the demanding matter of this society-organism in poetry, opening doors … could we? »

« My mother takes me to many performances, but this was the first time I really enjoyed a performance ». 8 years old boy.
_