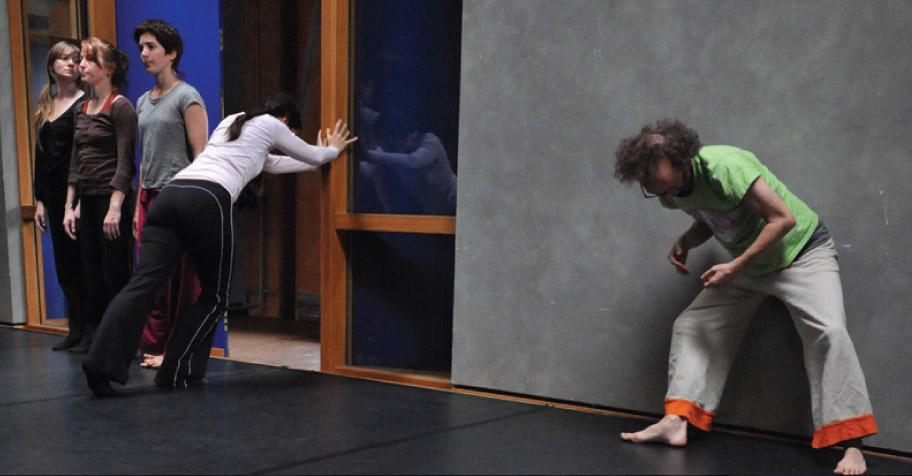 SKIN Zurich was realized in collaboration with Da.tanzda at the Gessneralle P2 Zurich, Switzerland on 20.05.08.

Tools Ws took place for 3 full days (18h). We shared the space with an audience of 25 people. The 13 artists that joined the project came from Germany and Switzerland.

“I came very open into this project and left with a lot of impressions, questions and wanting more. I found it interesting to work with different people from different backgrounds. For me i wished that there would have been more time to prepare the group and more consistency in the group constellation and more “performances”. What I found interesting was that the whole experiment had a big social aspect and less an artistic. For me it had to do with what happens in life how do i create my relationships? eyes, touch, not talking, moving, feelings, fear, joy, enjoy, not wanting, rejecting, being far, being close… in this i wished that we would have gone deeper but i know that there was not enough time and it is a huge topic to research for a long time.
For me the performance was a bit a shock because it was very different, experiencing the whole system than when we were preparing ourselves in a smaller a bit familiar system of human beings. There were more than double as much people in the room it felt a bit tight for me and i felt that it was a risk to be in-charge of the whole group dynamic which we could not practice before. There fore it would have needed more experiments with the public maybe increasing the number of people consistently.
The discussion and the end i found very helpful for the whole group to hear different opinions about the whole experiment from very experienced dancers to people who have hardly seen any performances. I got an other perspective, a more open one, than my artistic mind uses to think about performances. ”

“in one way I was surprised about how well the performance worked. But with a second look, with a little distance I
was rather disappointed. I  thought: of course some people, who are not performers, enjoy when they feel allowed to
participate and find themselves daring. But then once they start daring, aren’t they satisfied rather quickly? And the
“performer audience” I felt them split between there “normal self” and their “performer self”, which could actually be
an interesting state.  Wasnt it “just” a well organized organic party? And maybe that is what this project wants. From the part of
self-organization it was an interesting experience, and yet, I would wish for more challenge, or maybe just another
possibility to do it again, now that I know hzow it could work, I could go in with more distance, which for me would be a
better place to be.”

“after the Skin performance coming back to my apartment I was glad about what happened.
I could learn a lot and during the rehearsals because it was my first dance performance, I am also pleased with the performance. I am pleased that it has been about inviting the audience to join without coercion or the feeling arose that we must do something. It was a very respectful meeting. I found the tools very helpful. To move in a bubble, to dance for a person or for the room… It gave me a good feeling of space. I had the time to understand what I needed from myself in order to dance. When I’ve improvise in the theater, what is what i knew until now, It had always been a task given to me from the outside, the motor of my action… ”

“Thanks a lot for this process and project which is going on in my body, heart and mind…
It was an experience which brought me deeper in something that follows me for a long time, already…
… about seeing and looking at the things constantly happening…
… about being in seeing…
… about feeling the quality of seeing…